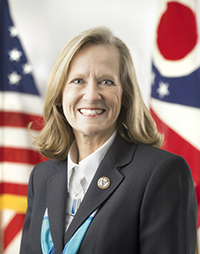 Marital Status: Married
Spouse: Jim
Employment/Military Record: Ashenhurst retired from the U.S. Army and the National Guard in October 2015 after over 37 years of service. She served at all levels of command and in 2011 was appointed to the gubernatorial-level cabinet position of adjutant general of the State of Ohio, commanding the 17,000 service members of the Ohio National Guard, the Ohio Naval Militia and the Ohio Military Reserve. Upon retirement from the military, General Ashenhurst served as the senior vice president, military strategy with R2 Associates.
Religion: Lutheran